Mediterranean Mini's are very personable little souls, and make both wonderful pets, and fun little competition/recreational Donkeys. Dedicated breeders are currently importing some terrific new lines into Australia, and the breed is growing in popularity as more people become aware of these versatile and loving little animals.

American Miniature Mediterranean Donkeys are arguably the most gentle, affectionate and docile of all Equines. They are exceptionally intelligent, learn quickly, and are easily trained. The first and foremost attraction to American Miniature Mediterranean Donkeys is their loving personalities. They form close attachments to their owners, and thoroughly enjoy human company. They will ask for your attention with friendly nudges and brays, snuffles, snorts, and funny little sounds.

American Miniature Mediterranean Donkeys are a breed of their own, and not 'bred down' as are many other Miniatures, (which can cause the inherent genetics of an animal to become diluted).

Originally from Africa, they were taken to the Mediterranean Islands of Sardinia and Sicily to be beasts of burden. They pulled carts, carried loaded packs and did other farm work. Today most Miniature Mediterranean Donkeys are kept as pets, as a hobby, recreation, and showing.

Because Miniature Mediterraneans were so small, they were employed to turn grinding stones for grain inside the peasants houses. There are 18th century wood block pictures showing these small Donkeys, blindfolded, attached to the grain mill and walking in endless circles. They were also used to carry water from village wells and supplies into the mountains for shepherds. Now almost extinct in their native land, these diminutive little animals are a popular pet in the USA, their popularity now spreading to other countries, with the importation of quality stock to various locations around the world.

In 1929 Stockbroker Robert Green imported six Jenny's and a Jack to the U.S from Sicily. He had heard about the wonderful little animals during a trip to Europe, and without even seeing the Donkeys he purchased and arranged their shipping through an agent in Paris. They were settled at his Stud Farm in New Jersey. Their adorable natures created interest, and these animals were supplemented with further importations into the U.S by other enthusiasts intrigued by these engaging animals at intervals up until the 1950's, and possibly the early 1960's. A registry was established in 1958 and is thriving today.

Miniature Mediterraneans usually have at least three recorded generations of ancestry. Many have up to 400 recorded ancestors, dating back to the first imports from Sardinia.

The purpose of this Registry is to keep track of the original American imports and their offspring, and to support breeders who wish to maintain these bloodlines. Between 1996-2007 seventeen American Miniature Mediterranean Donkeys were imported to Australia from America and from New Zealand, (from American imported stock).

The D.A.B.S.A Inc.’s American Miniature Mediterranean Donkey (A.M.M.D) Registry of Australia works with the American and New Zealand Registries to acquire full generation pedigrees back to foundation stock in America, when pedigrees are available.

Some of these Donkeys have pedigrees of over 400 traceable recorded ancestors, going back to the original imports in 1929. This information is vital for improving the breed, and avoiding inadvertent in-breeding. It is therefore also most important that all new foals are registered to record their lineage for future years.

An official Breed Standard from the National Miniature Donkey Association of America can be viewed here.

The Breed Standard is intended to describe the breed and assist breeders in the selection of stock. This Standard is a working document that will evolve as the knowledge and understanding of the Miniature Donkey grows. In developing a Breed Standard the N.M.D.A included a range of qualities that are necessary for the future integrity of the breed. Many breed organizations have attempted to reach an ideal animal with too much emphasis on only one quality or fad, such as size or colour. The results have been loss of function with reproductive, birthing, conformation and temperament problems. This Standard is meant to assist people interested in the stewardship of the Miniature Donkey, with the final purpose of passing on healthy, vigorous and fully functional animals for the generations that follow. The NMDA Breed Standard recommends against breeding animals smaller than 30".

The US based National Miniature Donkey Association is a non-profit, membership supported organisation established in 1990. The goals of the Association are to protect the Miniature Donkey breed, to educate owners and breeders on care and management, and to promote the breed. The official publication of the N.M.D.A is the Asset, which is provided to members quarterly.

D.A.B.S.A Inc. has an established Studbook for all eligible, (as deemed by D.A.B.S.A Inc. register regulations), American Miniature Mediterranean Donkeys, and an appendix register for percentage crosses. 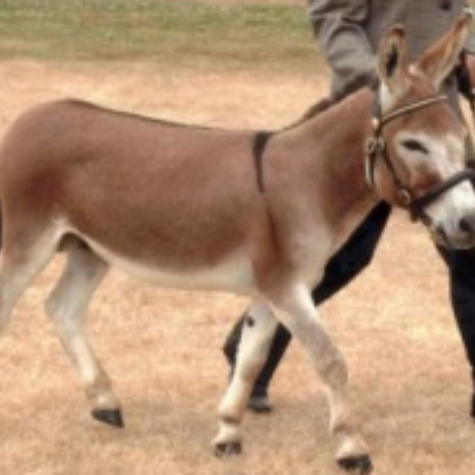